The highest point in Johannesburg is Constitution Hill. It is a place of deep sadness and remorse but also of hope and imagination. The constitutional court is housed on a space that once served as prison cells for those who opposed Apartheid. Today a group of friends journeyed through this high point. 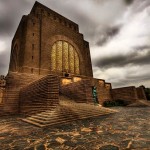 Proclamation Hill is the site of the Voortrekker Monument. A place commemorating the Afrikaner’s victory over the Zulu warriors in what is now called the “Battle of bloed rivier”. It is a dark place, a place that mixes the dangerous poison of nationalism and religion. It is not a high place, in fact it is a narrow minded place. For me it is a low place.

These Hills are paradoxical. Constitution Hill celebrates the diversity and possibility of a nation with different people of different creeds. Proclamation Hill is a place stuck on a narrow nationalism. Both these Hills are part of my story. It is Proclamation Hill that troubles me. I have benefited in a significant way from the poisonous cocktail of nationalism and Christianity.

Today I was reminded of the closing words of David Bosch in his book Transforming Mission. He writes that,

“Humility … means showing respect for our forebears in the faith, for what they have handed down to us, even if we have reason to be acutely embarrassed by their racist, sexist, and imperialist bias.  The point is that we have no guarantees that we will do any better than they did. (TM 485)”

This brings me to a Third Hill. Golgatha. Where the Way died on the cross offering forgiveness to those who killed him. He famously challenged his followers to love each other and to include their enemies in the rhythms of their love. It is this Leader that gives me hope to somehow walk into the paradox of Constitutional and Proclamation Hill. He invites us to repent and offer forgiveness.

Then there is a Fourth Hill. It is a people (not a place) that Jesus called the “city on a hill”. It is a hill that can be constituted of two people proclaiming and witnessing of the love of God for everyone; a group of people bringing out the God colors in the world. Living in South Africa as a white Afrikaner male, professing to be a follower of Jesus, I am invited to think of these four hills.

This site uses Akismet to reduce spam. Learn how your comment data is processed.